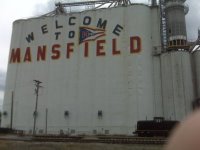 Posted 24 Jul in Video Production Crews by Audrey Coates
Reading Time: < 1 minute
It seemed like an average day at the track working for one of our best clients, NASCAR… when we were notified that it was the 5000th shoot day in Go To Team’s history. That’s right in the last ten years Go To Team has shot over 5000 shoots. That’s a lot of interviews, b-roll, live shots and hard work!

I was in Mannsfield Ohio, continuing our HD coverage of the Nascar Craftsman Truck Series for Speed Channel, when Patrick called me to let me know I was on the 5000th shoot that Go To Team had ever shot.

It was a novel thing to hear, but I was busy trying to give Mike and Keith the best footage I could, so the real signifigance of that number didn’t really sink in until after I returned to Charlotte. That is a LOT of cool TV from one company.

In an average month we shoot 60 or 70 shoot days between our crews in Charleston, Charlotte, Raleigh, and Richmond. And, I always do my best to keep up with my Go To Team brethren… it was just an honor that the 5000th landed on my day.