Go To Team Elite Camera Crew & Video Production Crew | A Big Day In Philadelphia… If the Rays can move it back to Tampa, Go To Team works some more! 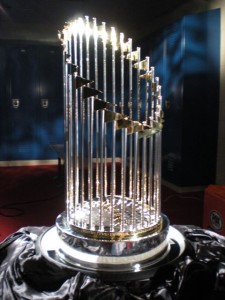 A Big Day In Philadelphia… If the Rays can move it back to Tampa, Go To Team works some more!

Go To Team’s Skip Clark and Rene Cusson had a big day at the World Series on Sunday.  They’re in Philadelphia working for Fox Sports following the Series from Game 1 to the best of seven finish.  Sunday started early in the day when they were busy shooting beauty shots of the 2008 World Series Trophy.  It had to be a quick set up, but beautiful.  A turntable added just a little movement to make the shot perfect!

So, thirty minutes of tape later and they were off to the Eagles NFL game where they went with the Philadelphia mascot, the Phanatic, to pick up Fox Sports talent Chris Myers.  The crazy mascot drove his red ATV over there while Skip and Rene followed in golf carts.  It was a quick trip, but they managed to fit in time for a picture! 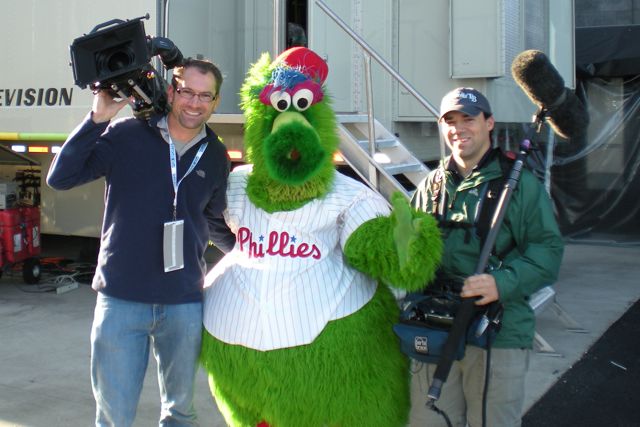 A miscommunication at the Eagles stadium left Rene in the wrong golf cart and unable to capture all of Chris Myers’ jokes, so he ran next to the Phanatic and his ATV all the way from Lincoln Finanacial Field to Citizens Bank Park!  It’s only a couple of blocks, but he ran the whole way!  Let that be a lesson to future apprentices; you’re gonna have to step up to compete with the likes of Rene Cusson!  Stay tuned to Fox Sports for Game 5 tonight.  Apologies to Go To Team’s resident Phillies fan, David Baker, but for Skip and Rene, let’s hope for a Rays’ win tonight so they can eek out a couple more days of work out this!