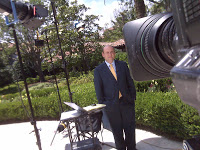 Baker May Tour ’08 Comes to Close

Posted 28 May in Charleston Video Camera Crew by Audrey Coates

May Has been an extremely busy and exciting month for Go To Team’s Charlotte based Baker Crew.  Starting with a trip to Sea Island, GA for CNBC Coverage of the Federal Reserve Bank of Atlanta’s Financial  Markets Conference with Steve Liesman. After making the 6 hour drive back to Charlotte, the Baker crew went to work with American Express at the Black Enterprise Entrepreneurs Conference, creating Web content on the Panasonic DVX100A, and enjoying the rare night’s sleep in their hometown. 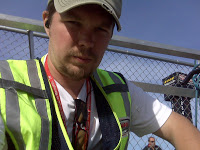 Two days in Charlotte was 2 days too many for the Baker crew. Fortified with a good night’s rest, the Crew packed up the Panasonic Varicam, and headed off to Des Moines Iowa in pursuit of Motocross/Supercross Legend turned Stock Car Driver Ricky Carmichael. The weather was tailor made for working at the track, and an early mishap on the track kept the crew busy through a slew of frantic pit stops. Iowa however, soon faded from the rear view mirror, as the Crew followed Ricky to his training facility/Motocross track outside of Tallahassee Florida to give TV viewers a previously unheard of glimpse of his personal life. While there, the Baker crew witnessed Ricky setting a 36 foot Step up jump record….from the top of the ramp!! 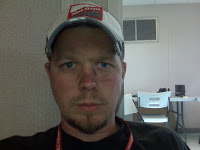 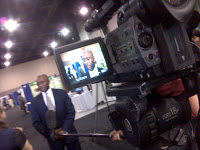 Having had their fill of the Sunshine State, the Baker Crew shot back through Charlotte and on to Mannsfield Ohio to cover the Nascar Craftsman Truck Series for Speed channel.

With the prison used in “Shawshank Redemption”, Trains, and even a friendly Steer, Mannsfield certainly offered up a lot to shoot, and the access to trackside during the race, truly helped the Baker Crew bring viewers up close and personal with the race.  It’s a dirty job, but someone has got to do it! The Tour concluded with a quick run into Cleveland for an Indians/Rangers game.  A perfect ending for a varied and exciting month of shoots spanning five states.  Dave Baker and his crew are presently home in Charlotte, rested, repacked, recharged, and ready for the next tour……