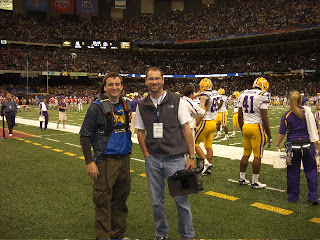 Go To Team‘s Skip Clark and John South wrapped up the BCS season with Fox Sports in New Orleans on Monday. This year’s crazy college football season sent them to West Virginia twice, Atlanta for the SEC Championship, and to VA Tech twice for features. Then it was off to the bowl games. Clark and South made it to Phoenix for the Fiesta Bowl and then to New Orleans for the National Championship. While they were in Phoenix they got to hang out with Boomer and Sooner, the Oklahoma mascots, and the West Virginia Mountaineer. Using Go To Team’s new Microdolly system, they also spent a lot of time shooting scenics of the Phoenix area. The championship game was exciting (both Skip and John are from Ohio) and then disappointing (because Skip and John are from Ohio). And now that the college football season is wrapped up, Skip and John are preparing for the Super Bowl that will bring them right back Phoenix at the end of the month!