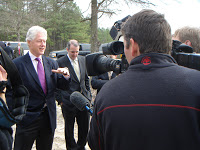 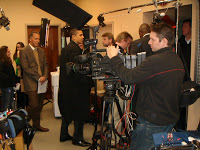 As a SC based ENG crew, Go To Team’s DP Tom Wells and Nick Modisett can’t complain. This year the SC Primaries were held independently of one another, with Republicans voting for their candidate of choice on

January 19 and the Democrats casting their votes a week later on January 26. All politics aside, this equates to one thing for the GTT duo – double coverage. After a week of following Gov. Mitt Romney and Senator McCain around the state, Tom and Nick transitioned over to the Democratic party’s campaign efforts, focusing on the Clinton campaign with ABC Correspondant and GMA Weekend Anchor Kate Snow. Bill and Hillary Clinton both made stops throughout the state most of the week asking for voter’s support. If there was a brief lull, however, the crew jumped onto the Obama campaign trail, following both the Senator and his wife as they drummed up support for Saturday’s voting. The week ended for the crew with a two camera interview between Barack Obama and Kate Snow, which aired Saturday, the day of the Democratic Primary, on Good Morning America. After 100+ hour weeks back to back, the Wells crew is at home “charging their batteries” before their next assignment begins later this week. 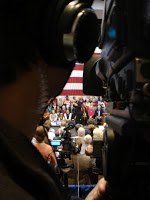