Alright, so we didn’t really get to play ball with the Democratic nominee.  But we did shoot all the video!  ESPN’s Stuart Scott and producer Marc Weiner came to Greensboro, NC, to interview the Presidential Candidate and Go To Team crewed the whole thing.  Skip Clark from Charlotte, NC, and Jimmy Hall from Raleigh, NC, brought their Panasonic Varicams while Rene Cusson and Ian McCullen ran audio.  Emily South was there from Charlotte as the make-up artist.  ESPN had a one-on-one with the candidate as they used a high school gymnasium to set up the interview and then play a little basketball. 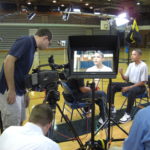 The interview was a “down to brass-tacks” conversation, but the game was a little one-sided.  No one is saying that Stuart Scott let Obama win, but when the guy is running for President of the United States of America, and the guy has an entire team of Secret Service agents wandering around the entire gym, you’re probably gonna go a little easier.  Be sure to check out the story on ESPN.com!