Go To Team Elite Camera Crew & Video Production Crew | Go To Team Wraps Up The BCS Features – On To Miami! 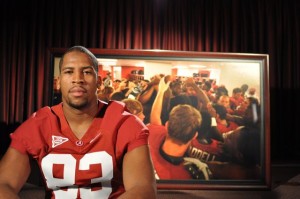 Go To Team Wraps Up The BCS Features – On To Miami!

Skip Clark and Rene Cusson have finished this year’s round of BCS features for Fox Sports.  Out of the eight schools going to bowl games this year, Go To Team’s Charlotte-based crew shot three, VA Tech, Florida, and Alabama, covering almost 2000 miles!  Our last blog caught up with them while they were in Virginia with VA Tech.

The following week they headed South to catch up with Fox Sports producer Mike Hughes and the Florida Gators.  With three days in Gainesville, FL, they shot three features and the open for the National Championship game.  They were in the locker rooms, the training room, the weight room, on the field, and all over Gainesville.  Be sure to look for the Tim Tebow feature in the pre-game show; that shoot brought the production team to four locations in one day; St. Francis

Community Center (pictured below), a hospital, a church, and Lawtey Correctional Facility where they spent some time with the warden!

Following their time served in Gainesville, they wrapped in Florida and headed for Tuscaloosa, AL, where they met up with producer Joel Santos and the Crimson Tide.  Things had to be quick in Alabama, the team was very busy with practice, meetings, and all the preparations for the Sugar Bowl.  It’s the 75th Sugar Bowl, Alabama’s 13th appearance there, and some are calling it Alabama’s return to football.  They interviewed Coach Nick Saban, this year’s seniors, and the QB/Center duo that have been leading the team for three years.  Check out the seniors feature in the pre-game show; there’s a snap-shot above. 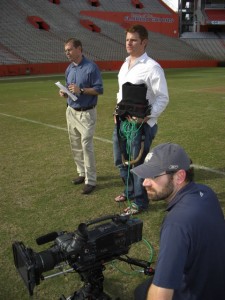 Now that Skip is wrapped with the features, they head home for the holidays.  But not for long!  Skip picks up with Dan Lowrey at the end of December and they head for Miami for the Orange Bowl and the National Championship games.  If you’re around the four days after the Orange Bowl, give Skip a ring!  He’s sticking around between the two games and looking for stuff to do in Miami!