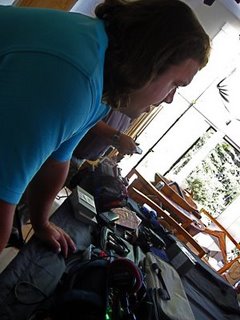 GTT Frontline on the Big Story

Is there anything more exciting than getting THE CALL to do an exclusive interview with a national figure? Last week Go To Team got that call. Our Raleigh and Charleston ENG crews (Tom Wells, Jimmy Hall, and Ian McCullen) shot the exclusive interview for ABC News’ Nightline with ex-presidential candidate John Edwards.

The interview went off without a hitch, well, maybe just one… As any audio operator knows, on some occasions his worst enemy isn’t planes, car horns or even overzealous passersby vying for a little screen time. Many times it’s the subjects themselves. This was the case on Friday when John Edwards disobeyed rule number one of the audio operator’s Ten Commandments…Don’t Touch Your Mic!

And leave it to Jon Stewart and The Daily Show to point it out. Stewart gave his best impression of audio technician Ian McCullen when John Edwards tapped his chest and mic when referring to his heart. Well, Jon, you just about nailed it.

Meanwhile, on the set…after Ian picked himself up off the floor…he just shrugged his shoulders, “There’s not a thing I can do about THAT.”

A nod from an ABC News producer acknowledged the reality.