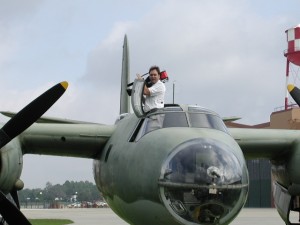 DP, Dan Beckmann, atop the B-26 Marauder

Go To Team‘s Orlando Director of Photography, Dan Beckmann, spent the weekend inside one of World War II’s most successful aircraft – the B-26 Marauder.

With only a handful left in the world, the Marauder was the first US medium bomber used in the Pacific during World War II.  And according to the United States Army Air Forces Dispatch from 1946, the plane distinguished itself as “the chief bombardment weapon on the Western Front.”  The Marauder also maintained the lowest loss record of any combat aircraft during the war.

Using a jib and a smoke machine, Beckmann and his crew (on location in Orlando, Florida) were able to simulate combat bombardment drops – as if flying through the clouds at 20,000 feet.

With several “fly-by’s” throughout the day, The History Channel also showcased the F-86. 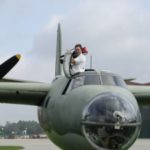