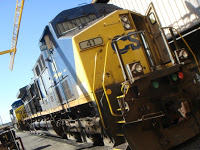 Go To Team’s DP Tom Wells and Nick Modisett were back on the road this week in southern Georgia shooting a segment on trains for History Channel’s Modern Marvels. The location was a trainyard used for servicing and repairing locomotives. 100 ton cranes, 30 ton diesel engines, hard hats and steel toe boots all played a part in the production. You can see from the pictures that the latest Parisian fashions were NOT part of the shoot, however. Nick especially fell victim to the fashion trends that day, sporting a hybrid outfit apparently inspired by the village people. Tom donned a similar outfit but was somehow able to avoid being photographed all day, or perhaps he just deleted the pictures – we’ll never know. All the fashion faux pas were overridden, however, with the fact that the segment was shot in HD on the Panasonic Varicam. 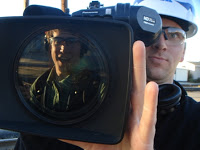 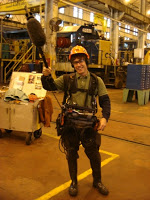