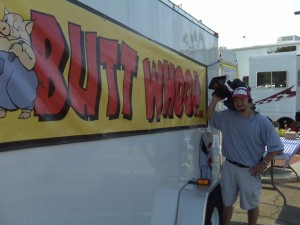 Go To Team’s Charlotte Based Dave Baker is back home and rested up after a busy couple of weeks on the road. The month began with ABC’s “Good Morning America” and “World News Tonight” coverage of the hunt for a Serial Killer in Gaffney, SC with Jeffrey Kofman.

After a brief Trip Home and a battery recharge, the Baker Crew headed South again to aid in HD Coverage of the BBQ Challenge in

, SC for The Food Network.

Fortunately the Sony F900 kept Dave’s hungry hands out of the majority of the samples being offered up for the competition, though a select few samples did go missing…
Fortified with a “Healthy” dose of “the other white meat,” the Baker crew shot back up to its Home Base in Charlotte, NC, grabbed a Sony D-600 Beta Camera, and Ironically shot a story on heart health for NBC’s “Dateline”, before droppng south of the border again with GTT’s Panasonic High Definition HDX900 for John Deere in Fort Mill, SC. 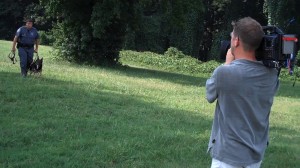 After a few flashbacks to the farm he grew up on, Dave Baker finally left the mowing to the experts at John Deere and headed to Shelby, NC with a Panasonic SDX900 and audio expert Frank Perez to shoot a segment of Animal Planet’s “Untamed and Uncut.” The story detailed the apprehension of an escaped convict by Police K-9’s “Ruger” and “Jada.” The highlights of the shoot were the demonstrations in which these Police Dogs showcased their skills by tracking and “Taking Down” their trainers for the camera. Jada expressed a strong and totally unexpected interest in Dave during the shoot. Keep an eye out for this upcoming episode to gain a “Perp’s” eye view.