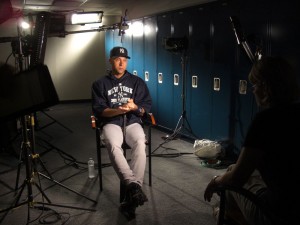 It’s now been a full week that Go To Team’s Clark crew has been out on the road.  Skip Clark and Dan Lowrey have been out covering the ALCS for Fox Sports and they’ve been having a great time with it!  Yesterday – Wednesday – was sort of an off-day for the crew as the Yankees and the Angels took a day off after the first two games in Anaheim.  But they were still at work picking up some interviews with Yankees players like Derek Jeter and Jorge Posada and team manager Joe Girardi.  These interviews are always set up in some auxiliary locker room that’s buried deep in the stadium.  So even though it was sunny and 75 out, Skip and Dan were cold and in the dark for most of the day!  But it got better as they headed up to Los Angeles to meet up with the whole Fox Sports crew for some dinner at one of their favorite dives – Casa Vega.  Get the quac and the chili con queso – they’re awesome!  Tonight is the last game in Anaheim and if the Angels win they’ll head back to New York for Game Six.