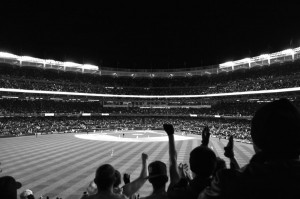 It was cold.  It was rainy.  And it was a long day.  But everyone hung in there for Game Two of the American League Championship Series.  Go To Team’s Clark crew is in New York covering the ALCS for Fox Sports as they follow the Yankees and the Angels in the best of seven series.  Charlotte-based Skip Clark and Orlando-based Dan Lowrey were at Yankee Stadium Saturday night shooting game highlights, crowd scenics, and artwork that will be used throughout the ALCS as well as the World Series coming later this October.  The crew hung in there through all thirteen of the innings as the Yankees finally pulled it out, 4-3, extending their lead in the ALCS to 2-0.  Sunday is a travel day to Los Angeles as they follow the series to Anaheim.  Be sure to tune into Fox Monday night for Game Three!