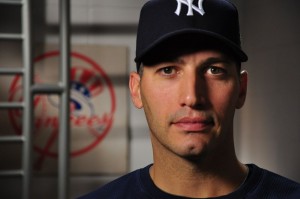 Tonight is Game One of the World Series and Go To Team’s Charlotte based Clark crew will be there in New York for everything.  But before the first pitch tonight, there was Media Day yesterday.  Skip Clark and Orlando based Dan Lowrey were busy all day Tuesday working through interviews with the Yankees.  And probably the biggest challenge of the post season run for the crew.  They had to set up for the interviews in – of all places – a luggage storage room.  That’s literally what it said on the wall outside the room.  That’s just a fancy name for a closet!  But they made it work!  The crew went wandering for background elements and they found some railing that’s normally used for the stadium seating.  They hung that up vertically and it created some depth in the otherwise bland, white, concrete block walled room.  They also had to prepare a way to slide a green screen in and out for interview so they could have two different set-ups.  Once Skip and Dan got the room set up, it was a constant rotation of Yankees as they came in before, during, and after Tuesday’s workout.  Today they’ll be at the stadium to pick up a couple more interviews before game time.  And then they’ll jump right into highlights mode!  Be sure to look out for all the interviews, scenics, and bump shots that will air throughout all of the broadcast tonight on Fox Sports! 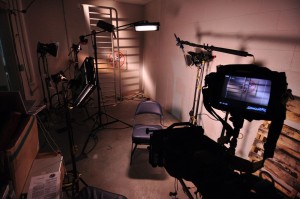 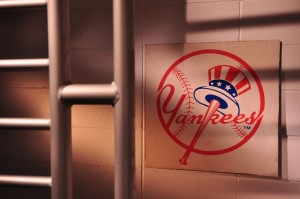