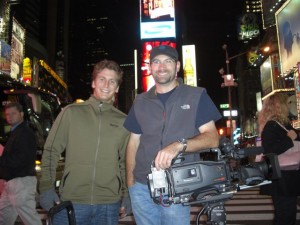 Go To Team is covering the Major League Baseball post-season for the second year!  Their assignment will include the ALCS between the Yankees and the Angels and then they’ll move on to the World Series.  Charlotte-based Skip Clark and Orlando-based Dan Lowrey are already in New York getting ready for the American League Championship Series.  Fox Sports hired the duo to be the ENG crew that will follow the series as it crisscrosses the country between New York and Los Angeles – it’s going to be a long haul for the crew!  But first things first – yesterday (Wednesday) was a travel/work day for the crew as they arrived in the city.  After gathering all their gear they headed into Manhattan with producer Josh Oshinsky to shoot scenics for the pre-game show.  They hit all the usual spots – Central Park, Radio City Music Hall, Times Square, Washington Park, and Broadway.  They’ll be out in the city again today (Thursday) looking for a few more shots then they’ll head back to the stadium for batting practice.  The big question for everyone is the weather – the forecast is calling for rain starting early this afternoon.  Be sure to keep up with the blog as they keep sending in pictures and – of course – be sure to watch the ALCS starting this Friday on Fox! 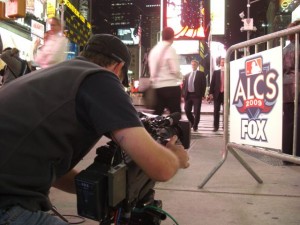