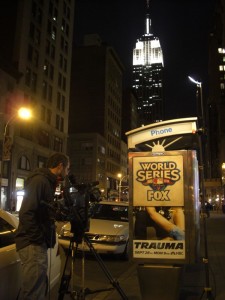 Yes – Go To Team’s Clark crew is still in New York.  And, yes, they spent another day shooting New York scenics.  But it’s a big city!  So they had to head back out last night and hit some of the spots they missed the first few nights they were here last week.  Charlotte based Skip Clark and Orlando based Dan Lowrey have been following the Major League Baseball post season since the American League Championship Series and now they’ll stay on the road through the World Series.  Working for Fox Sports, they’ve been shooting all of the beauty shots on one of Go To Team’s Panasonic Varicams.  The shots are used for billboards and features that air throughout the pre-game show and the game broadcast.  Some of the shots even use some signs that Fox had made up specifically for the ALCS and the World Series.  For those signs, Skip and Dan pull out a couple of different battery operated lights to help the signs match the city lights – either a PAG camera light or a Litepanels LED light – both mounted to a small ENG lighting stand.  This keeps them mobile and a small operation.  Key elements in New York!  After a long night of shooting, dinner was in order.  It might be a sight-seeing stop, but you really can’t beat the Carnegie Deli.  So Skip and Dan stopped in for some pastrami on rye – with swiss!  And it all had to be followed up with some cheesecake and 5th Avenue pie.  Be sure to tune in Wednesday night for Game One of the World Series as the Philadelphia Phillies come to New York to take on the Yankees! 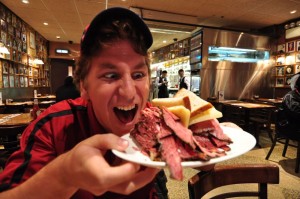