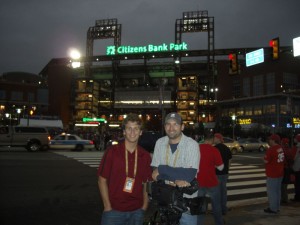 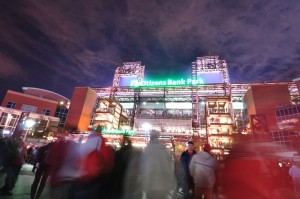 'The Bank' At Night

After a day in Philadelphia to prepare with scenics, days eighteen and nineteen brought Games Three and Four of the 2009 World Series.  Go To Team’s Skip Clark and Dan Lowrey (from Charlotte, NC, and Orlando, FL) were busy both days picking up pre-game scenics and game action for the pre-game show and all the features.  But the first shoot was all about food!  Because Citizen’s Bank Park has the largest grill in all of Major League Baseball, Fox Sports just HAD to shoot a feature about Bull’s Barbeque.  And Philadelphia’s own Greg “The Bull” Luzinski was there to show everyone why ‘The Bank’ is known to have some of the best ballpark eats.  While Skip and Dan had help on the ribs – they had to share with the producers?! – they put a pretty big dent in the pan!  Be sure to tune into Fox Sports tonight for the last game in Philadelphia.  And maybe the last game of the series?  The Yankees lead the World Series three games to one. 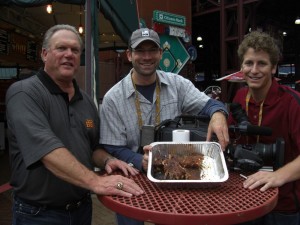