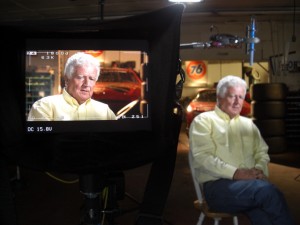 Speed will be airing a special documentary the week before this fall’s NASCAR Sprint Cup Series Talladega race, and Go To Team‘s Director of Photographer Skip Clark was there for a lot of it!  Producers Andy Parsons and Neil Sullivan from Speed called on Clark and fellow Charlotte, NC, DP Dave Svenson to shoot all of the interviews and stand-ups for the show.  The special will cover the years before the track ever existed and continue right through its first race.  Do you know why the Start/Finish line is far down the front stretch?  Do you know who really won that first race in 1969?  What about the driver’s union; who was behind it?  The history of Talladega is as storied as its races!  Both Clark and Svenson used their Panasonic Varicam to shoot all the content.  And while the interviews were never quite this fast, check out this time lapse of Skip’s set-up as they interviewed James Hylton!  Be sure to check out Speed for airtimes. 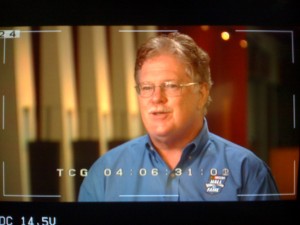