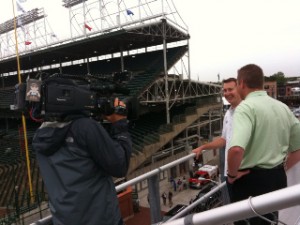 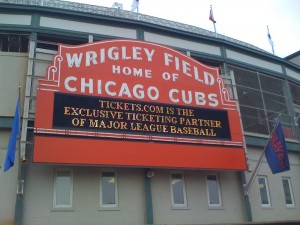 It was the last race for Fox Sports NASCAR and Kyle Petty landed in Chicago and they did it big!  They were in Chicago covering the NASCAR Sprint Cup race for TNT and NASCAR.com.

The week started with a tour of Chicago with Sprint Cup driver Kurt Busch.  They visited Busch’s favorite ball club, the Chicago Cubs, and all the spots around Wrigleyville, the hot dog joint Portillo’s, the Chicago White Sox, and, of course, Miller Lite’s headquarters (Busch is sponsored by Miller Lite).

The week continued with a shoot over at Chicago’s famous Second City comedy troupe with TNT’s Kyle Petty and NASCAR.com’s Rutledge Wood.  We’re sorry there aren’t any pictures – it was enough for Skip to hold the camera still while they were shooting the story – he was laughing the entire time!  It was a great shoot with some amazing talent from Second City – oh – and Kyle and Rutledge as well.

Be sure to look for the Second City part of the story on NASCAR.com!  That wraps it up the NASCAR schedule for Skip and Dan for 2009!

Check out some of the video here.