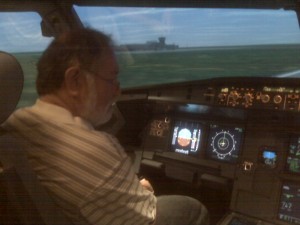 The Baker ENG Crew found themselves back in Charlotte, at the U.S. Airways training facility with NBC’s  Lester Holt and Hudson River landing  C0-Pilot Jeff Skiles, as he spoke about the months since the crash landing, his training, and how he is ready to get back to work.  The interview was shot  inside a 15 million dollar U.S. Air Airbus simulator for an MSNBC Documentary to air this summer, using GTT’s Panasonic HDX900, along with GTT’s Panasonic AVC-HSC1UP camera, used, once again for its ability to create a beautiful 1080iHD picture while its diminutive size allows it to fill a role generally given to “lipstick” cameras.  After shooting the story, a shorter version of which was featured on “The Today Show”, Dave Baker and Frank Perez were given a chance to take off, fly, and land in the Simulator.

As can be seen in the picture, Frank proved to be as excellent a pilot as he is at runing audio equipment.  Please note that there are no pictures of Dave Baker Flying the simulator, as Frank was unable to peel his white knuckles off of the arm rests while Dave tried his hand at flying.

Dave Baker is more than happy to fly wherever his skills are needed, however, it may be best to keep him in the passenger compartment!