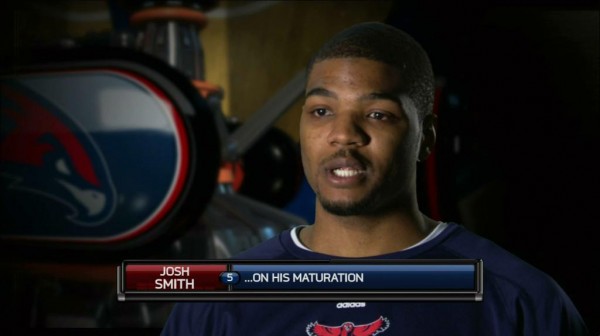 Go To Team Dishes Up Thanksgiving Dinner with the Atlanta Hawks

DP Tom Wells and Audio Op Jason Stoddard traveled to Atlanta over the Thanksgiving holiday for Turner Sports to cover the Atlanta Hawks – Orlando Magic game.  The crew shot green screen interviews with players, standups with reporters, and scenics for bumpers during the game.  The game was on Thanksgiving night, complete with turkey and dressing complements of craft services.  Since the game started just after sunset the crew had to wait to begin shooting the scenics of Atlanta until the last minute.  After grabbing shots of fan arrivals it was a mad dash from downtown Atlanta’s Phillips Arena to Lennox Mall in Buckhead, almost 12 miles away, to shoot the lighting of the Lenox Square Christmas Tree.  After stopping to catch a couple of skyline shots the crew darted back across town to deliver the tapes before the second half, only to run back out into the night to finish up scenics of downtown’s Centennial Olympic Park, CNN center, and the Turner Broadcasting complex.  The crew used the Sony CineAlta F900, which is great for shooting nighttime scenics because of the camera’s black gamma functions.  Tom was able to crank the camera’s black levels up to reveal the detail of the nighttime skyline without sacrificing detail in the highlights, allowing for some amazing shots on a very dark night. 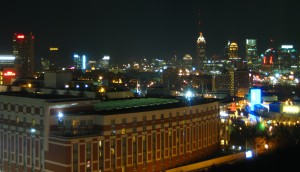