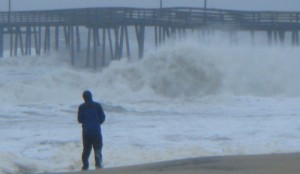 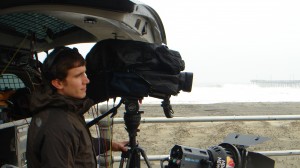 Go To Team’s Richmond, VA based video production team scooted over to Virginia Beach, VA to cover presumably the last major storm of 2009 on the east coast for The Weather Channel. Since GE now owns NBC, MSNBC and TWC, the Modisett video production crew shot for all three networks, making for some extremely long, wet, fun shoot days. The nor’easter storm was left over from the hurricane named Ida which did not make landfall in Virginia. While the late 2009 storm was not a true hurricane it did total $10 million in damages just in Virginia Beach. Flooding, power outages and falling debris caused all kinds of problems in the coastal city and the GTT video production crew was there, Beta SP cam in hand, to cover it all. We may be the only people who enjoy standing in bad weather! (of course, we never want the bad weather to cause damage!) 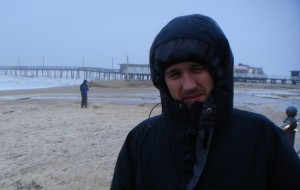