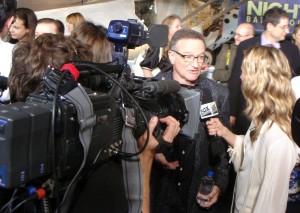 Modisett Crew Spends a “Night at the Museum”

Hollywood was on display at the Smithsonian in our nation’s capital and Go To Team’s Richmond based HD video crew was there to take it all in. The Modisett crew traveled to the National Air and Space Museum in Washington D.C. to cover the premier of “Night at the Museum: Battle of the Smithsonian” for “World Premiere” on Fox Movie Channel. After doing some stand-ups and scene setters with host Tava Smiley, we hustled our spot in the rope line and caught up with stars Ben Stiller, Owen Wilson, Amy Adams, Hank Azaria, Ricky Gervais and some guy named Robin Williams. He was hilarious! Although we wanted to know what it was like filming in a museum, Robin went off on how his new cow heart gets angry with him when he eats red meat…for five minutes. It was hard not to laugh with the funniest man on earth two feet from you. The event and the shoot went without a hitch and it was cool to meet a few movie stars that always bring a smile to my face. 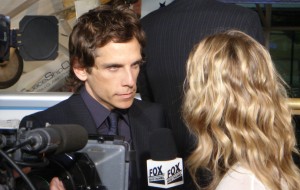