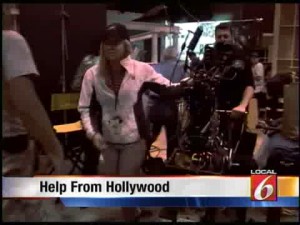 Orlando Crew goes Behind the Scenes on Letters to God

Letters to God is an inspiring movie about a young boy fighting cancer who finds strength and hope by writing a series of correspondence to God.  In doing so, he begins to change the lives of all those around him.   Production for the film took place in and around various locales throughout central Florida, with their main location inside one of the many sound stages on the back lot of Universal Studios Florida.  Production recently wrapped in central Florida, and Go To Team was there to capture the action!

Behind the Scenes Electronic Press Kits is familiar territory for Go To Team.  Our DP’s have worked on several films, from Basic with Samuel L. Jackson and John Travolta, to Cold Mountain with Jude Law and Nicole Kidman, and The Strangers, starring Liv Tyler.

Letters, however, allowed Go To Team an opportunity to venture into new territory.  GTT Executive Producer, Sue Stauffer, helped tackle the marketing and public relations side of production.  Aside from Orlando DP, Dan Beckmann‘s behind the scenes coverage, Stauffer managed several “behind the scenes” projects of her own – one of which, was peaking the interest of local media to help spotlight – not just the film itself – but how film production within central Florida is helping rejuvenate the local economy.