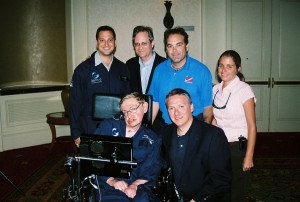 Go To Team Flies with Stephen Hawking in Zero G

It wasn’t quite like a trip to moon, but for a lifetime of confinement for Astrophysicist Stephen Hawking, it was a chance to fly -literally – away from his wheelchair.

For 12 thirty-second maneuvers, Professor Hawking floated weightless aboard Zero-G – a specially modified Boeing 727-200 aircraft. The plane, which performs a series of what is called “parabolic maneuvers,” created in-flight-like Mars, Lunar, and zero-gravity experiences.

Taking off from the space shuttle landing facility in Cape Canaveral, Florida, Orlando DP Dan Beckmann (who has performed over 300 parabolas himself) documented the story for NBC News along with correspondent Tom Costello.  The story, shot on a Sony HVR Z1U camera, aired on the Today Show.

Grinning from ear to ear, it was obvious this truly was the experience of a lifetime for the world-famous theoretical physicist .