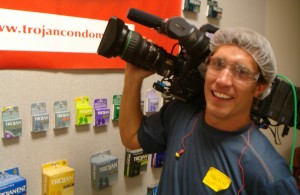 There are some things in life that are better left a mystery. How did this delicious sausage link get made? Who really built Stonehenge? Is DP Tom Wells actually from planet earth?

Recently, Go To Team’s Richmond, VA based HD video crew, cameraman Nick Modisett (kvurn3xeip) and audio operator Andrew Uvarov, uncovered a mystery of epic proportions…how condoms were made. The boys spent a day at the Trojan condom factory in Colonial Heights, VA shooting for a New York based marketing firm.

From the birth of the condom, to its packaging and distribution, the video crew was there to get all the money shots. If you want a condensed version of the condom making process, read on. First, large glass phalluses on a conveyor belt are dipped into latex. Some of these glass tubes have ribs, studs and other interesting shapes that make that particular condom special. After the latex dries another machine pulls the condom off and puts the individual rubber in a large basket. Then a little sucker thingy comes by and whisks each condom into a machine that tests the product. The condom is blown up like a balloon and if it doesn’t pop, which most don’t, it is put on another belt that rolls it up. Then your fancy lubricate, spermicide or flavor of the week is added. After a few more inspections, the condom is put into its packaging and it’s ready to ship to pharmacies, gas station bathrooms and Wilt Chamberlains across the globe. While describing the process doesn’t do it justice, it was an eye opening experience to see how a simple product is made. 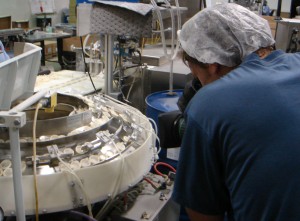