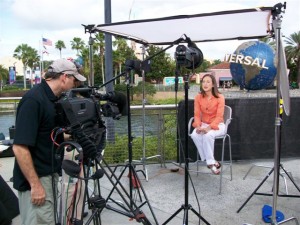 ”We haven’t seen deals like this in years,” said Genevieve Brown, senior editor at Travelocity.com. Her tip: Book an air-hotel package and save $300 or more.

Travelocity spent the day going “live” from Universal Studios Florida – and Go To Team was there to capture all the action with our Panasonic VariCam!

After nearly a dozen live shots for affiliates across the country – explaining the amazing summer deals offered at Universal and all over central Florida – Dan Beckmann, GTT’s DP/Partner, followed the Travelocity Traveling Gnome all over the park!