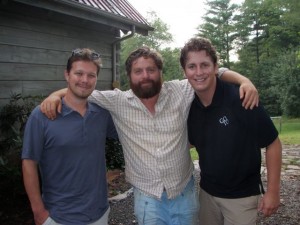 Go To Team’s Charlotte based crew Dave Baker and Dan Lowrey headed for the hills of Ennice, NC, for some “one-on-one” time with actor Zach Galifianakis.

Being fans of the movie, The Hangover, they knew they were in for a treat! With Zach’s typical “improv” comedy style, an “accidental” fall from a hill in his backyard proved to be quite the scene.

With no stuntmen on location, Zach managed to find the courage (after a little motivation and a glass of wine) to continue on with the skit. Though there was laughter in the air, the message was serious. The Men For Women Now campaign produced a web-based-video featuring prominent men highlighting the importance of breast cancer prevention and early detection.

Bob Saget, Arnold Schwarzenegger, Jack Black, and Neil Patrick Harris were just some of the celebs lending their support. After the shoot, the crew had a little time to chat with the comedian and take a few pictures. Despite being bruised from the “fall,” Zack was more than happy to support the campaign – and, as always, continue to make everyone laugh.

For more infomation check out menforwomennow.com

Click here to check out the video from our shoot!