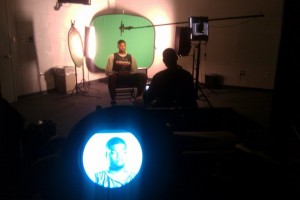 Atlanta Crew Shoots Around With the Hawks for NBA Playoffs

Go To Team’s Atlanta based Director of Photography Tom Wells has been getting into all kinds of things since he made the move to Atlanta this year, and now that the Hawks are in the NBA playoffs he’s getting to know Phillips Arena like the back of his hand.

Tom has been covering the action for Turner Sports by shooting practices, locker room press avails, green screen interviews, scenics and reporter stand ups. Turner’s camera of choice for the series has been the Sony CineAlta F900, a favorite of DP Tom Wells.

Gear of special interest for this shoot is the newest addition to Tom’s gear package – 1×1 LED Litepanels. The lightweight Litepanels run on both AC and DC power – this means not only can they be plugged into the wall for traditional interview setups, but they can also run off of battery power – up to 1.5 hours off a single battery. This option allows a high degree of mobility around Phillips Arena while providing consistent quality lighting, no matter where the action takes him.

The Hawks and Bucks just finished game 7 , with the Hawks narrowly clenching a win and claiming their spot in the second round of the playoffs. Stay tuned to Turner Sports for coverage of the Hawks quest for the championship, as well as some beautiful footage, brought to you in part by Go To Team.