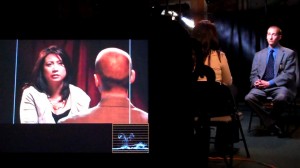 Posted 28 May in Charleston Video Camera Crew by Audrey Coates

Go To Team’s Charleston based camera crew traveled to the town of Seven Devils, North Carolina  to film Angeline Hartman of “Americas Most Wanted”.  Hartman’s goal is to spread the word and aid authorities in their search for Christopher Warren Meade. Meade is the key suspect in the murder of his wife, Deana Schermerhorn .  Go To Team’s, Dave Baker, brought a Sony D600 outfitted with Canon High Definition lenses, and a DVX100a.  Lighting was handled by the Go To Team arsenal of Kino-Flo Diva’s and Arri Tungsten light fixtures.  To see a snippet of the Baker crew in action, check out the local coverage of the shoot on our post or at Tri-Cities.com video 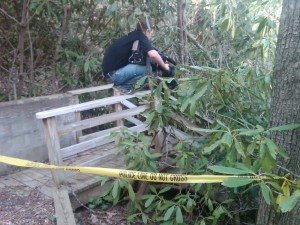