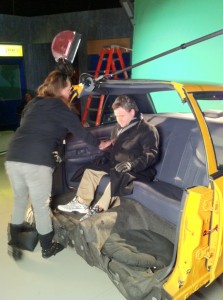 Half A Taxi Cab, A Green Screen, And A Very Funny Guy On Fox Sports 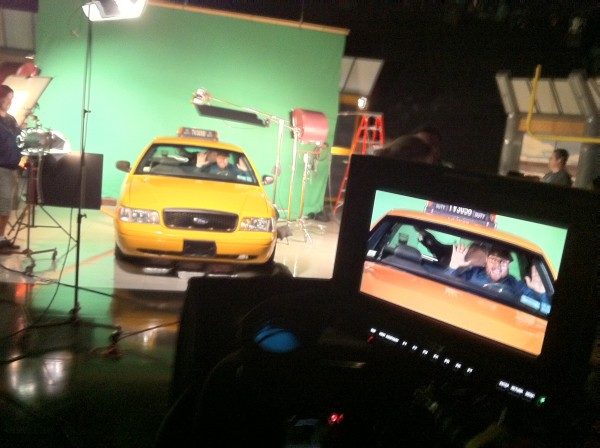 Quick Break For A Make-Up Touch-Up

Throughout this 2010 NFL season, Go To Team’s Skip Clark,  now based in Los Angeles, has been busy working with Fox Sports shooting features and artwork for the Sunday NFL Pre-Game show.  And that means he’s been laughing most of the time with the show’s comedian analyst Frank Caliendo.

Every week Skip and the whole crew at Fox Sports shoot Frank’s picks for the week’s games as Frank impersonates everyone from John Madden to Jay Leno.  Recently, it was Robert De Niro and they headed to New York for the shoot.  Well, not quite.  At least they made it to a green screen and a New York City cab.

For the shoot the team used two cabs, the first “half-cab” was used for the single shot of De Niro in the back seat.  Then they brought in a real cab for the wide shot of De Niro and the driver, Fox’s own Chris Pizzi.  Everything was shot on the Panasonic Varicam and one of Go To Team’s new Canon ultra-wide angle lenses, the new 4.3 11X.  Be sure to tune every week to see ‘who’ shows up on the pre-game show on Fox! 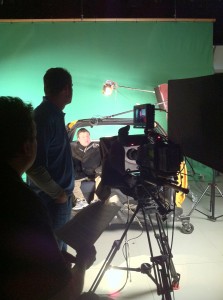