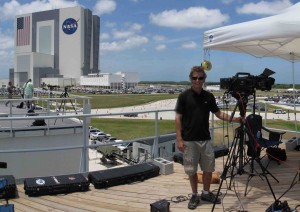 Lowrey Live at Nasa with Atlantis Shuttle for NBC

More than 40,000 people showed up to watch one of NASA’s final space shuttle launches at the Kennedy Space center in Cape Canaveral, Florida. Go To Team’s Orlando based, Dan Lowrey was there to document the launch. Atlantis took off at 2:20 pm at over three thousand miles per hour at takeoff.  Lowrey was covering the event with Kristen Dahlgren of NBC News Channel. Since most of there live shots took place before the launch, Dan was able to have a little fun with his POV camera on Atlantis’s take off. Check out the video below to see what the ContourHD can do!