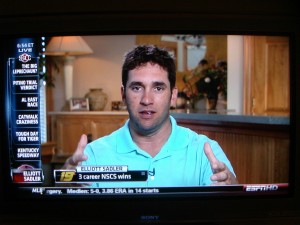 On Sunday, August 1, 2010, NASCAR Sprint Cup driver Elliott Sadler crashed into the inside retaining wall at the Pocono Raceway during the Pennsylvania 500.  Soon after, NASCAR officials reported it was the hardest collision recorded in the sport’s history…and it sure looked like it.  The entire engine flew on the track and the front end of the car was destroyed.  Amazingly, Sadler got out of the car, laid on the track for a minute and then walked away.

A few days later, ESPN called Go To Team’s Charlotte based HD video crew. Nick Modisett and Roger Woodruff, headed to Sadler’s beach house in Eastern North Carolina to do a live shot for SportsCenter.  Sadler was taking a much-needed vacation after the scariest wreck in recent memory.

The crew figured Sadler would be pretty sore and maybe even a little immobile after being blasted into a wall traveling over 80 G’s but that was not the case at all.  He was walking around, carrying his newborn baby and even cutting up with us.  He said he was a little sore in the shoulders but over all he felt pretty good.  It goes to show that massive safety improvements NASCAR has made in the past few years are really working.  Elliott Sadler was a very nice guy and we here at Go To Team had a great time with him and wish him the best in the future. 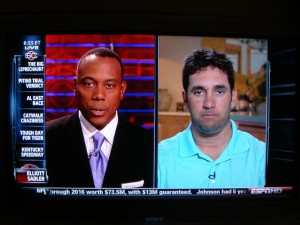