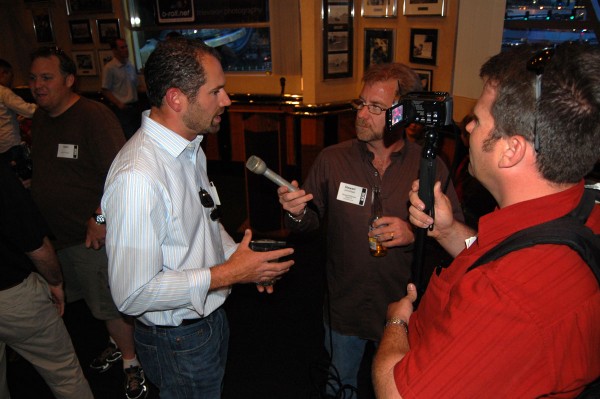 Director of Photography, Skip Clark being interviewed at NAB

The National Association of Broadcasters holds a major event in Las Vegas each April and the Go To Team staff headed there to see the newest developments in broadcast equipment. Every year there is an unofficial theme to NAB. Five years ago it was High Definition and then gradually the HD Cameras began to make it to real life production (although 40% of our clients are still shooting standard). This year the theme was 3D. Every booth was showing off their connection to 3D cameras, 3D projectors, or even printed 3D glasses. The most notable, being the Panasonic AG-3DA1.

In addition to 3D, NAB was filled with tons of cool new tools including small HD pencil cams (like contour and go pro) that cost a fraction of traditional cameras… around $300.

By far one of our favorite highlights of the NAB convention (other than the playing in las vegas), was hanging out with the other television photogs at the B-Roll.net Bash. The annual NAB event is a great time and brings together a lot of really fun folks swapping stories from the field.  Skip Clark, GTT DP got to spend some time talking to the B-Roll.net Crew (Stewart Pittman and Chris Weaver) about what he’s been shooting in the past year.