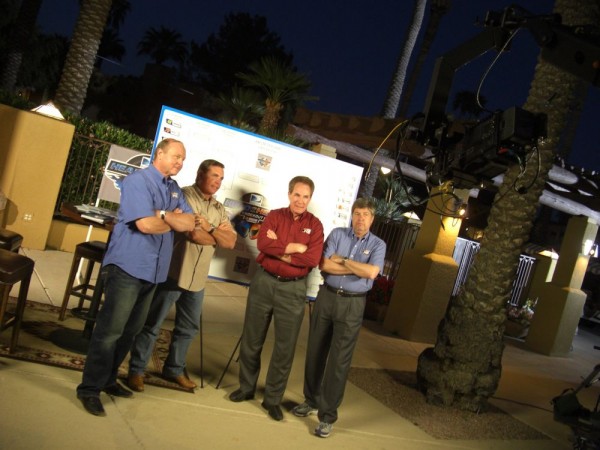 On the Set with FOX Sports NASCAR in Phoenix, Arizona

The Whole Crew At The End Of The Shoot: Darrell Waltrip, Jeff Hammond, Larry MacReynolds, and Mike Joy 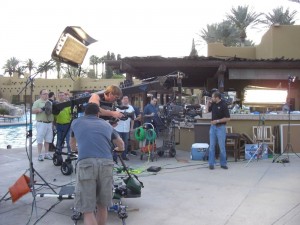 Behind The Scenes Early In The Day

Fox Sports was on the road in Phoenix, AZ, in early April for their coverage of the NASCAR Sprint Cup Series.  Charlotte based Director Of Photography Skip Clark and audio operator Roger Woodruff were busy at the Wigwam Resort as Fox Sports geared up for their Head To Head Knockout promotion.

It was a three camera shoot with some of the Fox Sports broadcast talent; Darrell Waltrip, Jeff Hammond, Larry MacReynolds, and Mike Joy.  Skip Clark DP’d the shoot with his Panasonic Varicam along with Brad Hutton and some local crew from Phoenix.  The producers wanted plenty of movement in the feature so Skip put cameras on a dolly and a small jib for the smooth beauty shots while he kept his camera hand-held for a little more movement.

The big challenge was the lighting as the shoot started right at dusk.  The crew had to work hard and fast to maintain the look and the color throughout the shoot.  But everyone loves to shoot at ‘Golden Hour!’