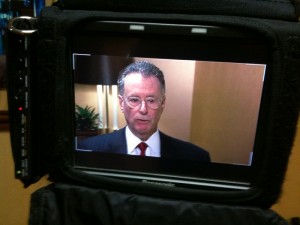 Orlando’s DP, Beckmann Gets it Done for NBC News

For DP/Partner, Dan Beckmann, shooting interviews for the Today Show is a pretty simple assignment.  As a former staff cameraman for NBC News, Dan has lit, edited, shot, and been shot at, all over the world.  So you’d think a simple assignment such as a one-man-band interview at a hotel would be as easy spelling N.B.C. N.e.w.s.  You’d be right.  Feeding HD material through an SD signal with broken cables and missing components, however, is another thing entirely. 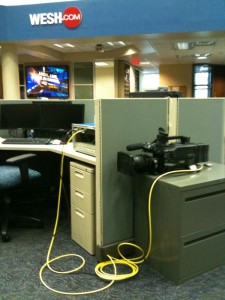 While on location for a Lisa Myers Today Show spot on former Vice Presidential candidate, John Edwards, Beckmann shot in HD with the Panasonic HDX 900, and made his way to the NBC affiliate (WESH TV) to feed the tape to the Washington Bureau.

Since WESH only provides an SD signal, a quick call to the station to discuss HD to SD conversions the night before, calmed everyone’s nerves.

WESH TV doesn’t have a DVC Pro HD deck, so Beckmann needed to feed straight from the camera using a Fire Wire cable.  But during the feed set up, the 1394 Fire Wire cables were unable to “lock in” a signal.  WESH TV couldn’t register a picture, which meant New York could see only a black screen, which meant Washington couldn’t take it in, which meant Beckmann had to start remembering as many McGyver shows as possible.

Turns out the “old school” way worked just fine!  Once the signal was “dead,” Beckmann switched the HDX 900 to VBS mode (composite/component switch), took a BNC Cable straight out of the video port of the camera, found a 5 pin XLR Audio Fan out, and was able to connect both, video and audio, to an AVP Unit in the WESH Newsroom.  Connecting the unit through the WESH PUP, the signal was then able to be fed – DC finally getting the material needed to edit.  All that was left in Beckmann’s bag of tricks was duct tape, silly string, and bondo! 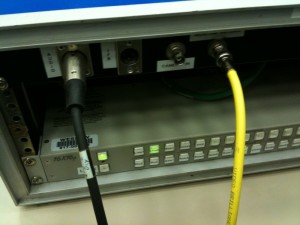 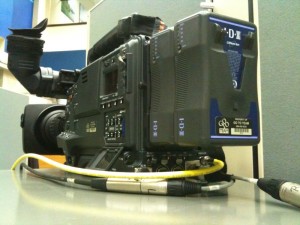