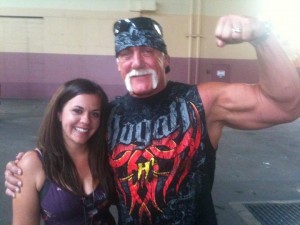 Orlando Editor Meets Up with Hulk Hogan for Round 2

Christina Klimis and Hulk Hogan on the backlot of Universal Studios

Before becoming employed by GTT our Orlando Editor, Christina Klimis, had worked in Reality Television. Her first show as an intern was Hogan Knows Best 4. This was her first taste of working on a show for a major cable channel. As she gained experience she was promoted to Assistant Editor. The position consisted of digitizing, rough editing, multi-syncing multi-cam shoots, organizing footage for editors and outputs for the network.

It was one busy year for her production life. Needless to say there was a steady overflow of footage, as she worked on 4 shows simultaneously. One of which was Brooke Knows Best Season 2. This show was a spin off after Hogan Knows Best came to an end on VH1. Hulk Hogan was a main talent in the show considering it was all about his daughter Brooke growing up and moving to Miami.

As Christina transitioned to her new position on the backlot at Universal Studios, she was surprised to see a familiar face. Yes, brother, it was Hulk Hogan. TNA wrestling films twice a month on the backlot for Spike TV. The wrestlers line the hallways in hot neon spandex, knee high boots and decorative face makeup. It becomes some what of an obstacle course to get down the hall! They are all 6 foot plus and well over 200 lbs!  The backlot hosts a variety of productions, but when the wrestlers are there, things are a bit more entertaining! 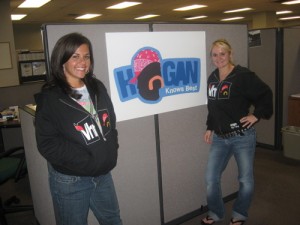 Christina and Associate Producer Sarah Hale in their Hogan Swag 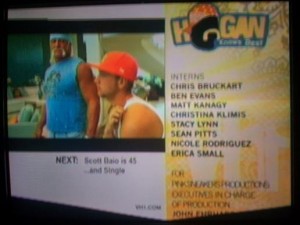