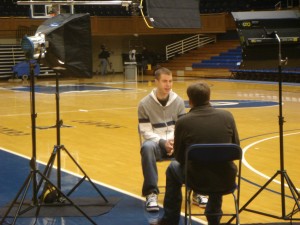 Before March Madness got underway, Go To Team’s Charlotte, NC based HD video crew sat down with Jon Scheyer, Duke’s senior shooting guard for an interview with ESPN.  He was a team captain, a 2nd team All American and the MVP of the ACC Men’s Basketball Tournament.  Duke won the 2010 NCAA basketball championship. Despite, Go To Team’s Nick Modisett being a  UNC Tar Heels fan, he had excellent coverage of this national champion.