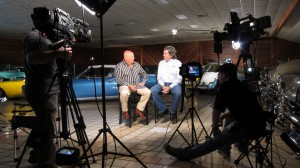 With the Barrett Jackson Car Auction coming up Charleston Crew, Dave Baker, and myself headed down to Gainesville, GA for SPEED.  Avid car collector, Bob Johnson, has quite a collection of automobiles in a large garage next to his home in Gainesville.  Armed with two HDX-900’s and an army of lights between the two crews, we lit his garage for his interview with Speed host, Bob Varsha.

When the interview was over we shot some stand-ups with Bob Varsha followed by some voice over’s.  Dave and I then reset the lighting around a couple of cars in the collection so that Mr. Johnson could show them off to Mr. Varsha. 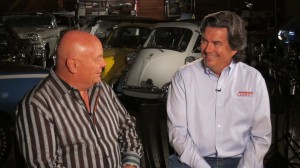 Afterwards Dave and I split off to shoot various cars in the collection.  Honestly, I could have shot footage of his collection all day.   While I was shooting b-roll Dave split off for a bit and captured some footage of Mr. Johnson driving around one of his rarer cars.

It wasn’t long before our producer had everything she needed.  Any day I get to shoot classic cars is a good day in my book.