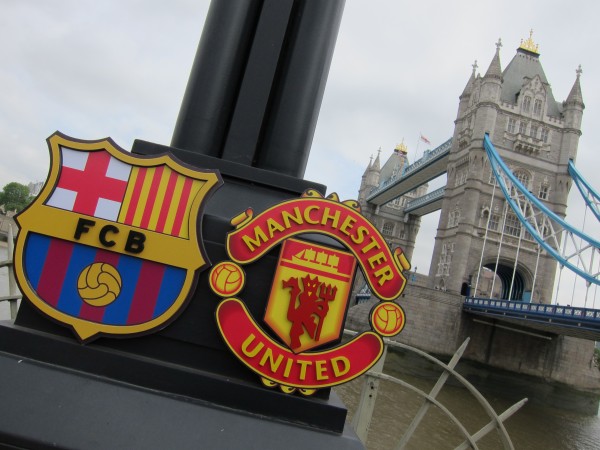 One Of The Set-Ups At Tower Bridge

Even with all the travel in the first half of the year following NASCAR, Go To Team’s Skip Clark found the time to take an assignment over in London!  Right after the race in Dover, Skip flew straight to London for a quick three days of scenics.  The crew, headed up by producer PT Navarro, went over to shoot billboards and scenics for the Fox Sports broadcast of the UEFA Championship game between Manchester United and Barcelona.  The guys saw pretty much every landmark there is to see in London, and all the narrow streets and alleyways in between. By far the best decision they made was to hire a black cab and one of the best drivers in the city for all three days.  It made getting around the maze of streets so much easier – leaving more time for the long shot sheet they had to get through.  Tower Bridge, Buckingham Palace, Trafalgar Square, Big Ben, Westminster Abbey, Parliament, Tower Of London, Picadilly Circus, Covent Garden Station, the Eye Of London, Millennium Bridge, a bunch of Tube Stations, a fish and chips shop, a few pints, and, of course, Wembley Stadium. 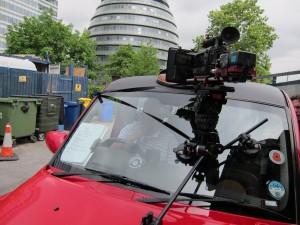 The F3 Rigged Up And Ready To Roll!

And all that work was doubled as Skip used Go To Team’s new Sony F3 and his trusty-old Panasonic Varicam.  While the F3 was set up for time lapses on an automated panning head, Skip used the Varicam to grab more energetic and fast moving shots of the same scene.  The crew also rented a car mount rig to attach the F3 to the cab for some driving shots throughout the city.  The narrow and curvy streets of London were perfect for shot as the Arri 10mm ultra-wide angle lens showed everything!  It was a busy few days, but on Thursday Skip was on his way right back to Charlotte, NC, for the NASCAR All-Star race!