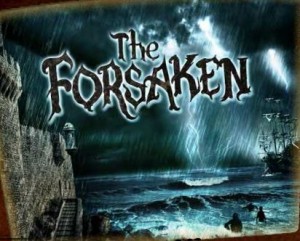 Halloween Horror Nights’ “Forsaken” the Behind the Scenes Tour

Forget everything you learned about Christopher Columbus.  It wasn’t just the Nina, Pinta, and Santa Maria that sailed towards a new world – there was a fourth ship.  One that never made it.

Condemned to a watery grave, the crew has returned with a vengeance.

Click on the link below for a sneak peek…