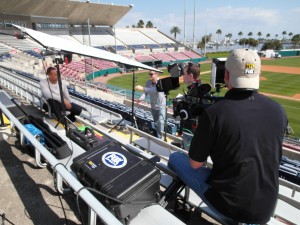 It’s February.  And they’re in Daytona.  The NASCAR season is just getting started.  What is Go To Team’s Skip Clark doing at a baseball field in Tampa?!  Interviewing Yankees shortstop Derek Jeter for the Daytona 500 Jimmie Johnson feature.  The driver of the 48 car has won five straight championships in NASCAR’s Cup series and is something that is unprecedented in NASCAR and rare in all of sports.  Fox worked to get some of the biggest champions in sports, Lance Armstrong, Wayne Gretzky, Kelly Slater, along with Jeter to ask what it means to be a winner of multiple championships.  It was just convenient that Jeter was over in Tampa that week shooting a commercial for Ford.  Skip, based in Los Angeles, headed over with JP Biciunas and interviewed the five-time World Series winner and the feature aired in the Fox’s Daytona 500 broadcast.