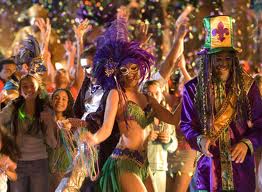 One of the benefits of being located on the back-lot of Universal Studios, is catching glimpses of all the preparations for Universal Orlando’s Mardi Gras Celebration – and this years festivities looks to be the best yet!

Every Saturday, and select nights from now through April 23rd, guests can catch one of fifteen live concerts by some of the biggest names in music.  Some of this years talent includes: The B52’s, KC and the Sunshine Band, One Republic, The Roots, Ne-Yo, Lifehouse, The Beach Boys, and Thrity Seconds to Mars.

Also on hand, is the most spectacular parade ever, colorful street performers, authentic Cajun food, beads by the handful, and much, much, more!

Guests can party in the streets as the sounds of The Big Easy fill the air of Universal Orlando Resort. It’s Beads, Bands and Good Times for everyone – Only at Universal Studios Mardi Gras.