Go To Team Elite Camera Crew & Video Production Crew | Nashville Crew Will Rock You Like a Hurricane! The tale of Hurricane Irene. 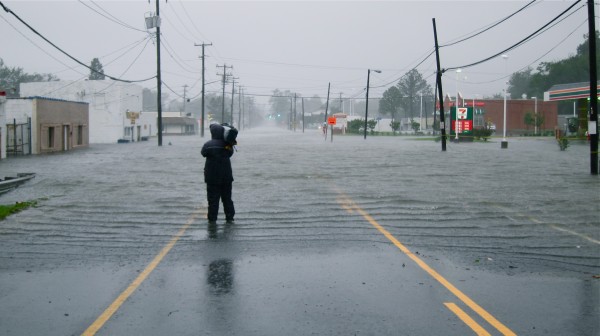 Nashville Crew Will Rock You Like a Hurricane! The tale of Hurricane Irene.

Nashville cameraman, Roggg Woodruff, in the thick of it.

Well, usually I’m the one rocking like a hurricane but this time it was all Irene.  With a big storm brewing I made my way to the east coast for The Weather Channel.   My first stop was in Charlotte to pick up a rental truck, get my gear loaded, and meet up with my audio guy, Kevin.  Once we were all squared away we got back on the road with our final destination being Wrightsville Beach, NC. 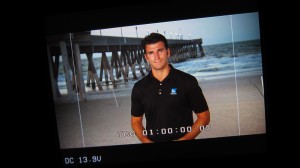 The following morning we had a 4am call time in order to get set up for our live shot.  That day I called the beach my office.  I set up two 400w Joker HMI’s to evenly light our reporter, Eric Fischer.  I used another to give the beach some light since our first hit was going to be before the sun came up.  I was shooting on the HDX-900 which is great for live shots since you can send a SD-SDI signal thanks to the built in down converter.

The next day found us heading north to the Virginia Beach area where we scouted for a good live shot location for the next day.  After another day of live shots we were less than 24 hours away from feeling the wrath of hurricane Irene. 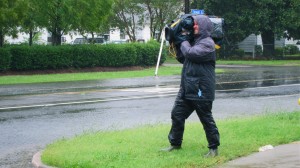 It's times like this when you're glad rain gear was invented.

With Irene overhead Kevin and I ventured out to gathering b-roll of the storm’s initial affect.  We drove around to find lots of people out and about.  I was a little surprised by that.  I was also surprised to find people were still boarding up windows and doors.  A few hours later we headed back to the Sat truck to feed the footage.  We did this throughout the day.  Shoot, feed, and repeat.  Driving through the thick of it, we ventured out to Norfolk, VA where massive flooding was going on.  Later on we headed down to Sandbridge, VA where a tornado had reportedly destroyed several homes.  When the day was over we had shot and fed the flooding of homes, stalled cars, roofs ripped open, trees torn out of the ground, and even people swimming in downtown Norfolk.  It was definitely a day I won’t soon forget. 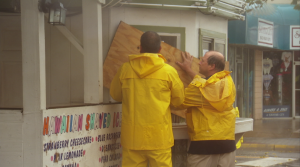 Two locals who waited till the last minute to board up their shop.

The following morning we ventured out to see what Irene had left for the affected communities to clean up.  By the afternoon The Weather Channel had goodnighted us and we on the road heading home.  I would have to say that this week went pretty good on account that no one got hurt, no equipment was damaged, and we all made it home in one piece.  I’ll take that any day. 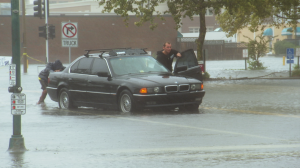