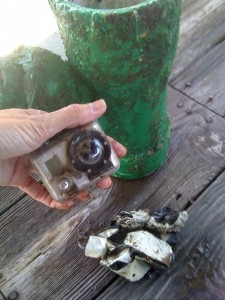 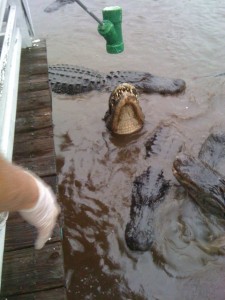 When my phone rang asking me to deliver a short turn around miracle, I knew I could count on my buds at GTT. I had supreme confidence that either my own “Danger is my middle name” Dan Beckmann or “I can hold my breath for hours under water” Dan Lowrey would not only shoot pretty pictures – but could also brave the elements and the critters to help me out at Gatorland.   I had no idea what elements and critters were headed our way.  (Well I actually figured on the critters).

The day before the shoot the weather kicked up with several warnings of torrential rains, hurricane force winds, tornado watches and hail!  Great!  And the shot list calls for getting gators riled up for romance.  And ECU of snapping jaws with 3000 lbs of pressure per square inch. Yikes.

But wait!  Have no fear, nervous producer.  “I’ve been to Africa – I’m not afraid” Lowrey steps in and even whips up a custom armor for the mini camera coming in with our show producer.  Go Dan-oh.  Water proof – check. Close up without fingers in danger  – check. Will look natural to our toothy stars – check. Only thing we weren’t ready for was the power of a tug-o-war with a 800 lb reptile.  One big chomp & pull and game over.  Gator 1 – Lowrey – 0.  Camera at bottom of murky lake infested with man-eaters. Did I mention that we had just spent hours toying with their emotions and chumming with smelly chicken parts. 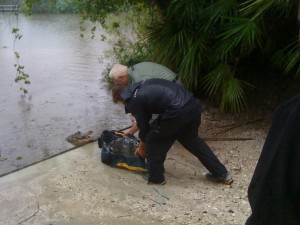 Dan Lowrey weathering the storm and getting up close and personal with the gators.

Well – all’s well that ends well  (without yet seeing the footage), as I was able to convince a gator handler to go back to the water’s edge this morning for one last effort.  Another MIRACLE! And – wah-lah!  Lowrey’s Chomp Cam  pulls through with a “we will just rest here quietly on the silty bottom and hope someone retrieves me after these giant gators aren’t looking”.  The snails weren’t pleased with giving up their oozy new home.

It was a long day. It was a wet day. But it was a great day for making cool tv and great tv production tales.

As the producer called me a ‘hero’ and thanked me again this morning for pulling together such a great team – I simply had to say… “of course. If this had been my footage, this was who I wanted to be there”.

I think I’ll try and arrange for less gators and more sunshine next outing.