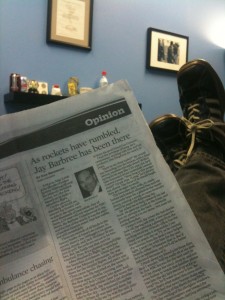 Beckmann reading his article in The Sentinel on NBC News Correspondent, Jay Barbree

Beckmann’s next article was featured in the Op Ed section in early October.

Check out the Jay Barbree piece via the link below…