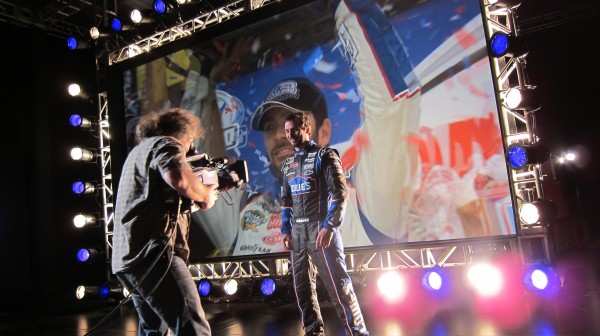 Seven Years Makes It a Tradition… The Hanger Shoot in Daytona for NASCAR on FOX.

Every year for the past seven years Los Angeles based Skip Clark has spent the first two weeks of February in Daytona for the Fox Sports broadcast of the Daytona 500.  And those two weeks start with the “hangar shoot” where all hands are on deck for one of the biggest shoots Fox puts together every year.  The crew takes over a hangar and, in just a couple of days, they turn it into five separate studios where the drivers rotate through for artwork shots that will be used throughout the year.  Each make-shift studio is known by a nickname: the Flag Room, Projection, the Garage Portraits, Green Screen, and the Speed Room. 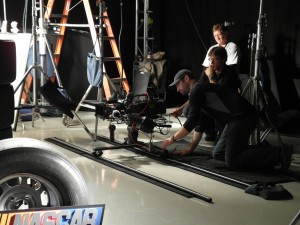 Go To Team Director Of Photography Tom Wells, based in Atlanta, lensed the Flag Room with Go To Team’s Canon 7D kit.  There was a giant 25 foot wide American Flag stretched out across a truss frame.  With such a giant canvas, Tom could place the drivers in a variety of positions and poses to really show off the size of the flag.  And the incredibly shallow depth of field offered with the 7D created a

unique look for the room.  Josh Bumgarner was there with his jib as well to give Fox those sweeping passes across the driver and to the flag.  Chris Bierlein joined Fox for another year in the hangar and was working in the Projection room.  In that “studio” the crew built a 20 by 11 foot projection screen where they played hero reels of each driver behind them and a flat screen in the foreground to play off of.  Then, for another layer, the crew loaded name graphics into a tablet computer so that Chris could play off that as well.  The projection screen had lights all around it that really made the space seem bigger than it really was.

Skip was working in the Garage Portraits room.  This space was meant to be simpler and the shots a little more serious.  In here the crew used corrugated aluminum from the hardware store and fluorescent lights overhead to recreate a garage environment.  Add a bunch of tools, tires, a pit box, and any other random item from a garage and there was a lot for Skip to play off of using Go To Teams micro-dolly system and brand

new set of Arri Ultra Pirmes.  Over in the green screen room DP Dan Schmidt worked with the drivers in a couple of green screen set-ups for footage that is being used in all of the comic book highlights reels used in every week’s broadcast.  Everything in these green screen rooms was shot on the Red to offer up the highest resolution to make the transition from reality to comic book a smooth one in the edit.  And, finally, the drivers would make a stop in the Speed room where they sat down for some interview questions and a couple more hero shots.  When it’s all said and done, it takes three days to build up all the sets and add the lights and cameras, one day to shoot everything, and a day and a half to tear it all down.  It makes for a long week, but one that’s always fun!  The footage will continue to air throughout the season until the end Fox’s broadcast season.  Be sure to catch a pre-game show and race to see how it all turned out! 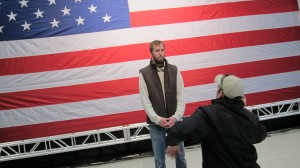