Go To Team Elite Camera Crew & Video Production Crew | Arri Ultra Primes on the Sony F3…The Newest Camera Out There And Go To Team Has It! 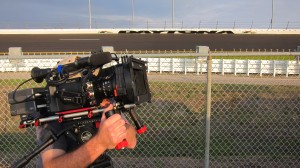 Arri Ultra Primes on the Sony F3…The Newest Camera Out There And Go To Team Has It! 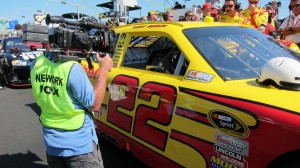 After working with the camera for two straight weeks, it’s everything we wanted it to be.  Los Angeles based Skip Clark took delivery of the camera while working on the Daytona 500 and it went from the box straight to the track in about two hours!  The crew couldn’t wait to get the camera out and see what it could do.  The big headline for this camera is the PL mount and Super 35 sized sensor.  This allows the DP to mount film lenses straight to the camera without any kind of adaptor or crop factor.  These film lenses bring with them all the depth and character that we see on the big screen, but now we can deliver that look to the small screen in a format and at the speed that television requires.  The F3 shoots in the Sony XDCam EX codec onto Sony’s SxS cards and all that’s required in Final Cut is a free plugin from Sony.

So, once we knew we were getting the camera, it only made sense to make the investment in some film lenses.  Along with the F3 package, we purchased a set of Arri Ultra Primes and they’ve been working with this F3 package ever since. 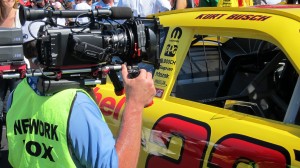 The biggest challenge with the F3, just like the Canon 7D, 5D, the Panasonic AF100, and even the Red, is the rig.  In television we’ve become accustomed to cameras built for our right shoulder.  But all these new cameras are basically just big housings for big sensors and they can be rather cumbersome to shoot with.  So, along with the F3, Go To Team bought some rigging from Zacuto that make the camera very easy to shoot with in the field.  It’s as compact and efficient as a broadcast camera, but shoots with the depth of a film camera.

This new camera, along with the lenses, promises to bring a whole new level of creativity to everyone at Go To Team and just expands the ever-growing list of cameras and equipment that we have to “Make Cool TV!”  Skip will be using the F3 throughout this year’s NASCAR season so be sure to tune into the NASCAR On Fox pre-race show every week!