Go To Team Elite Camera Crew & Video Production Crew | The World Series for Fox Sports… Does it get any better? 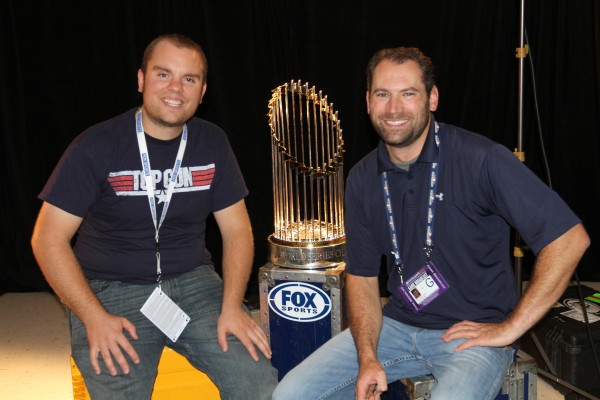 The World Series for Fox Sports… Does it get any better? 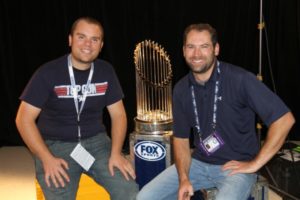 Roger and Skip With The 2010 World Series Trophy

Go To Team’s Clark crew, based in Los Angeles, CA, finished up their third year covering the World Series for Fox Sports early in November.  This year’s Major League Baseball World Series started in San Francisco, the National League finally won home field advantage this year in the All-Star game, and then moved to Texas.

Skip Clark and Roger Woodruff spent their time in the two cities shooting features for the Fox Sports pre-game show as well as features and artwork that aired throughout the broadcast.  Once the game started, Skip was down in the camera wells, right there beside the dugouts, shooting footage that would be used for the opens, teases, and roll-outs through the entire best of seven series. 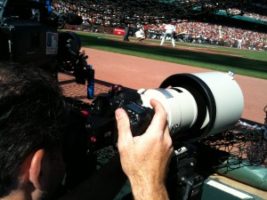 In The First Base Well With The 400mm Lens

And since it was the World Series, they brought all the toys; Fox used footage from both of Skip’s cameras, the Panasonic Varicam and, the newest toy in Skip’s arsenal, the Canon 7D.  The Varicam provided the quick turn-around that Fox often needed on game day while the 7D offered up the film-like images, both regular speed and slo-motion, that have made it so popular.

With the 7D and a 400mm lens, they were shooting nice tight shots at both home plate and the pitcher’s mound while keeping that shallow depth of field that makes the footage look like it came right off a film reel.