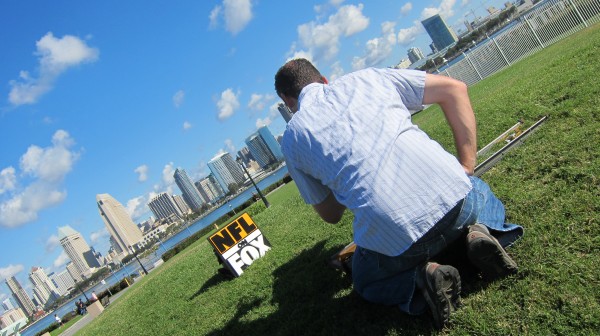 LA Crew Gets Down & Dirty with Fox Sports

Almost every week for this 2011 NFL season Go To Team’s Skip Clark has been on the road for Fox Sports.  He’s been shooting scenics and games for the NFL On Fox pre-game show on Go To Team’s new Sony F3.  After visiting a number of east coast cities like New York, Boston, and Washington, DC, it was time for some time closer to home: San Diego.  Skip made the trip down the 405 to I-5 with apprentice Ryan Ricker and they spent Saturday in the sun shooting all spots in San Diego.  But it wasn’t all fun in the sun.  Rain moved in for all of Sunday and that made for a messy game!  The best angle for football is always low so that meant that Skip was in the mud for most of the day.  All that rain gear he’s had for hurricanes over the years came in handy!